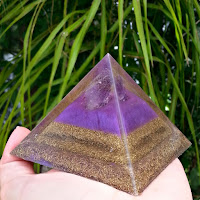 The Orgonite is a compound created from a quartz stone, metal shavings and resin. This composition creates a reaction that amplifies the qualities of quartz ... absorbs the energy that has been damaged by radio emissions (telephone, radar, radio equipment, etc.) restoring it and returning it to the orderly and beneficial environment.


Device operation is very simple: First the Deadly Orgone (DOR) is absorbing by the metal. The resin, trapped inside energy and maintained for a period of time. That's when the quart is responsible to polarize, with its ordered molecular structure. Finally the Positive Orgone (POR) waves, ordered by the crystal are returned abroad, harmonizing the energy of our body and our environment

History: In the 1930's and 1940's, Dr. Wilhelm Reich was able to detect and measure the existence of etheric energy (life energy, chi, etc.), which he called orgone, using a modified geiger counter. Dr. Reich determined that stacking alternating layers of fiberglass (an organicsubstance) and steel wool (an inorganic substance) would actually attract and collectorgone/etheric energy of both the life-beneficial positive form (which Reich called "OR" or "POR") and harmful negative etheric energy ("deadly orgone" or "DOR"). He constructed large boxes called orgone accumulators or "oracs" using this simple layering principle and was able to successfully heal his patients of various ailments, including various forms of cancer, by having them sit inside the box for periods of time. In 1986, scientists at the University of Marburg, Germanypublished the results of a blind study1which showed that 30-minute orgone accumulator treatments caused consistent, positive psycho-physiological effects not seen with the all-fiberglass box used for a control, stating "the results received in our investigation furnish evidence for the assumption that the physical properties of the orgone accumulator and its psychophysiological efficacy on human organisms, postulated by Reich and his associates, factually exist." Reich's work was continued in earnest in the 1960's by more open-minded Russian scientists such as Dr. Nikolai Kozyrev (1908-1983), who also scientifically proved that such unseen energies indeed exist all around us, and who's Reich-inspired work led to the unfortunate development of practical Soviet military defense applications which utilized principles of so-called "torsion fields" (e.g., etheric energy). Kozyrev's work, which indeed confirms both Reich's research and our empirical experiences with orgonite, was classified until the fall of the Soviet Union in 1991. 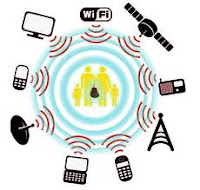 Ways to Use: Just place the device into an area and leave it alone. Observed beneficial changes in the behavior of people within the effective range of such devices, whether they are aware of their presence or not. It can also be carried on the person to afford a constant cleaning action in their personal energy fields.
The Orgone as a means of environmental protection: The orgone also protects against electromagnetic pollution generated by electric and electronic items such as computers, TV, microwave, mobile phones, Wi-Fi, Wi-Max, pylons, etc. . Another device is the Cloudbuster Orgone, it is a kind of cannon bombard the sky with Orgone energy, is widespread among followers of the chemtrail (chemical elements desiminan planes in the sky), and sometimes use it to undo the condensation trails created by the passage of these aircraft.
Publicado por Vik en 12:42 No hay comentarios:

Welcome to the crystal movie! This was a project that spanned 4 individual Spirit Science episodes, which combined like voltron to become one big exciting movie!
I want to take a hot second to talk about Crystals actually, it’s been a year or two since this movie came out, and I’ve had some powerful realizations since making it and i’d like to share that with you
The idea that Crystals are Alive is one that is discussed in the movie, and in the past year i’ve come to a deeper realization about what that means. Of course, Crystals do not have the same biological attributes as Mammals and Plants do, but they are not so inanimate that they don’t experience a change or transformations.
Crystals do Grow, but not in the same way that you might think.
The way that it came to me was through a discussion I was having with a friend. He pointed out to me that Crystals have more of a magnetic energy to them. They don’t breathe, they don’t circulate blood, but they have a “push and pull” sort of vibe to them, in the direction of different frequencies that we can find throughout the body, or in nature.
This is why crystals can have an impact on you simply by being in your auric field, they’re pushing the energies or pulling them in a particular direction, depending on the crystal.
Links and Sources
Data Storage in Crystal Quartz will Change Everything
What is Orgonite and How does it Work?
The Most Simple Crystal Guide you will Ever Read
The Most Comprehensive Crystal Guide you will Ever Read
The Spirit Science Guide to Crystals
The Secret of the Crystal Skulls